One of our guests at the peak of An Teallach

Taigh a' Bhraoin is situated in an area full of Munros (mountains over 3000ft) and a large number of our guests are what are known as Munro Baggers. There are almost 300 Munros and the aim of a Munro Bagger is to have reached the summit of every one of them (no mean task).

An Teallach is one of the most challenging with it's narrow ridge and sheer drops (not for the faint hearted). 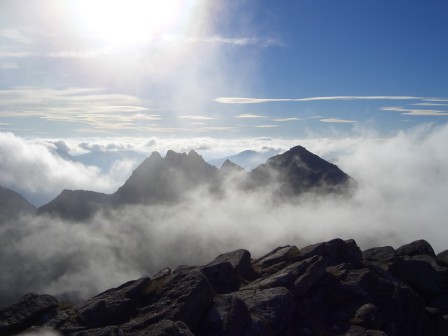 This photo was taken by one of our guests on An Teallach and is a phenomenon known as 'A Brocken spectre' (German: Brockengespenst), also called Brocken bow or mountain spectre, is the magnified (and apparently enormous) shadow of an observer cast upon clouds opposite the Sun's direction. The figure's head is often surrounded by the halo-like rings of coloured light forming a glory, which appears opposite the Sun's direction when uniformly-sized water droplets in clouds refract and backscatter sunlight.

Mary & Andrew McKenzie extend a warm welcome to you at Taigh a' Bhraoin.

to check availability and prices

Put your dates in to see if they're available.

Book Now Direct with us and get the BEST RATES

Take this opportunity to book yourself a fantastic cottage direct from the owners so you don't pay any commission.

Remember, we only have one of each week so

You will get our best deals by coming directly to US, the owners.

Phone us NOW on

for our BEST deals